The Lord Tedder hall’s Literary and Debating Society held the 2022 edition of its “King of the Podium” competition on Saturday, December 10,

The contest, which featured impromptu speeches among individuals and inter-hall oratory contest, was held at the Hall’s new Senior Common Room.

The “King of the Podium” is an annual oratory  contest which marks the full induction of rookies of the Tedder Hall’s Literary and Debating Society.

The President of the University of Ibadan’s Literary and Debating Society, Williams Neyen was present at the event.

The chosen topic for the Oratory contest was “Should Religious Symbols be Banned in Public Spaces?”. Speakers were judged on Content (50 marks), Delivery (30 marks), Creativity (10 marks), Dressing (5 marks) and Time management (5 marks), making a total of 100 percent.

After the Tedder Hall LND rookies battled things out with their wits, next was the Inter-Hall impromptu speech contest. The speakers were given an unexpected topic on the spot, and were expected to deliver a one minute speech on the given topic.

After the completion of both contests, the judges collated the scores and the winners were declared as followed:

King of The Podium

The President of the Tedder Hall Literary and Debating Society, Olayide Bolaji appreciated all participants and attendees.

He announced that one of the society’s suspended debate competitions, known as “World War”, would resume next semester. 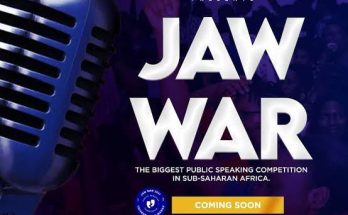