In the early hours of Saturday, November 13, just as noon knocked off the clouds with its trademark of the scorching sun, music rented the air in the Adekunle Adepeju Building, with intermittent chants of Aluta steaming out of the SRC Chamber. This was unusual, and anyone acquainted with the prevailing atmosphere around the students Union Building at least in the last two years would suspect that there may be a ceremony. The reserved, gentle, and notoriously diplomatic Akeju Olusegun was leaving. He was joining the league of Past Presidents of the University of Ibadan Students Union. Akeju had been longing for this moment; recall that some months ago, he pleaded with the University management to “please let us go”. For him, the handover was a moment of celebration, and not necessarily of reflection.

Some opine that Akeju had achieved nothing in his two-year reign as SU President; some say he has done a lot but he does not like to shout nor sing his own praises; some argue that his approach to leadership as SU President was diplomacy. We do not disparage the diplomatic gestures of Mr. Akeju, nor his ‘no-put me for trouble’ approach to issues that concern the students’ community. Our position at the UCJ is that Akeju has done his best for the students and he would be remembered for his drops of achievements; he has reigned unscratched unlike his predecessor; he navigated the ocean of unionism, facing the tide of the ‘not too democratic’ management, and ensured that the boat of our collective union does not capsize. He encountered a heavy storm last semester that presented itself in the form of accommodation fee increment, Akeju was tactful in his handling of the issue, and he sailed on successfully, albeit to the displeasure of many students. To the university management, he was a good boy.

He has dangled the baton for long, and it must have been a great relief when Adewole Adeyinka popularly known as MASCOT eventually received it from him. The race continues with Adeyinka , another folk who emphasized diplomacy throughout his campaign before he was elected at the SU election that was held on October 9, 2021. UI students are naturally diplomatic. The Baluba Lions and their look-alike brothers in the Katanga republic, would rather scream “Olayinka o” (or whoever the Vice-Chancellor is) under the cover of darkness instead of asking their student leaders and the management why they are treated as second class in the distribution of electricity on campus. The folks that reside off-campus, particularly in Ajibode would prefer to spend hours on the queue while merely wondering why we could not have more buses plying that route, it is not cowardice, it is diplomacy.

Adeyinka has an impressive profile, and without mincing words, he seemed the most qualified in the last Presidential race. In fact, it might have been disappointing if the other candidate had won. Apart from his modest profile, Richard also failed woefully as the house secretary in the Akeju administration. In a clime where leadership is matched with a stern call for accountability, Richard should not have the balls to contest. But we are Nigerians, and accountability is not a consequential word in our part of the world.

Adeyinka and other elected executives were inaugurated on the night of Saturday, November 13, 2021. As he took the oath of office, inside the Trenchard hall, he demonstrated the readiness to lead. No doubt the position is a lofty one, trailed by numerous expectations from an insatiable students’ populace, and we may guess that he is desirous of success. However, as qualified as he seems, we have our fears and they are quite dreadful.

First, we fear that Mascot may just be another Akeju, with the bristling eyes of a Lion but with the timid mind of a mouse. He may end up consolidating, negotiating, and soliciting with no significant results. These are the action words we found in the dictionary of Diplomacy. Of course, diplomacy is not a totally bad approach to unionism, but history says it is seldom productive, at least not in Nigerian universities. We know that diplomacy did not make the University of Benin reverse its decision to increase tuition, neither was diplomacy the catalyst that forced Obafemi Awolowo University to take decisive measures in tackling sexual harassment of students by lecturers. The list is endless.

Another premonition and a dreadful one at that is the issue of cultism, which we earnestly hope remains in the realm of fear and speculations. During the electioneering period, it was reported that the campaign manager of Richard, Akinola Olamide was assaulted and kidnapped by “suspected cultists” around the Students’ Union Sports complex. Olamide was being whisked out of the university premises until he escaped at the checkpoint at the university main gate. His principal, Richard alleged that the assailants were sponsored by his opponent. Although Mascot has vehemently argued that he has no affiliation with any cult group, there are speculations that he has the endorsement of these bad boys and we dread the return of cultism to the calm, serene, and largely peaceful campus of the Premier University. There have been unreported cases of cult clashes in the university premises in recent times and we hope that the security unit of the university takes all necessary steps to nip this menace in the bud. This is not a prophecy of doom, far from it. It is an expression of concern, which should be addressed.

The communities surrounding the university are evidently unsafe, and Agbowo in particular is now an Afghanistan, courtesy of these dreadful folks. We do not want them to infiltrate our campus, and we do not want them to see a friend to all’ in our MASCOT. The last Nigerian who proclaimed himself “for everybody and for nobody” attracted bloodsucking herders from Mali, Niger, and from across the Sahel; he attracted terrorism sympathizers and even decorated them with ministerial positions; he attracted incompetence, failure, hardship, and many bad friends who torment the ordinary Nigerian today. Adeyinka, please do not be for everybody and anybody. Be only for the peace-loving, progressive-minded, change-seeking students of the university, and others who desire greatness for the university.

Another thing that may become a cog in the wheel of the Consolidation administration is the ineptness of some of the cabinet members. Of course, the Press Night, which was held before the election, brought this fact into the limelight as some contestants were seen struggling to defend their acclaimed manifestoes. It was evident at the Press Night that a number of aspirants do not even understand their constitutional duties, much less have feasible plans for the offices. Without prejudice to his person, the new Public Relations Officer, Olalekan Michael seemed to lack the basic understanding of public relations; he could not define the functions of PR, nor its objectives. In his naive understanding of the office, he would only disseminate information. We look forward to his management of the union’s image and we hope he furnishes himself with the necessary skills to succeed in the position.

Having expressed our fears, we are positive that some achievements may be recorded by the new administration. As stated earlier, Mascot rode to victory largely on his impressive profile and his enticing promises. He promised to solve the problems of transportation, security, and also improve the welfare of students. We are optimistic that he would address the problem with transportation, in particular, especially for students residing in Ajibode. We also look forward to events and programmes that would improve the intellectual quality of UI students. Mascot promised that and we believe he has the right CV to organise such programmes.

His diplomatic stance may also pay off in securing students’ friendly policies from the management. He is experienced in unionism and he should be versed in dealing with authorities.

In conclusion, elections have been won and lost, and the businesses of administration and unionism have commenced for the consolidation team. We look forward to a union that upholds the welfare of students; one that is intellectually inclined; and one that actively resists the oppressive tendencies of authorities.

We also charge students to be participatory in the union’s objectives. Students should put the administration on its toes, but also be supportive because the administration may not achieve anything tangible without the collective support of students. To our new servants, we wish you success, and we say “May your path be rough!” 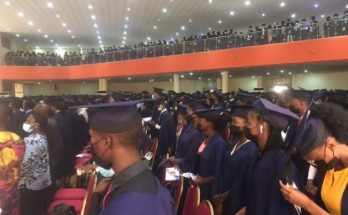